How are patient-focused organizations making tangible advances in creating life-saving and life-enhancing therapeutic innovations? The experiences of at least two foundations show that collaboration with stakeholders across industries – private, government, academia, insurers and clinicians – is a good place to start.

One example of success is JDRF (formerly the Juvenile Diabetes Research Foundation), the only global organization with a strategic plan to systematically eradicate the effects of type 1 diabetes (T1D) from people’s lives. As a foundation with cure, treatment and prevention strategies that drive the core of its mission, JDRF funds $530 million in scientific research across 17 countries. JDRF’s highest priority is funding research to deliver a cure for T1D and its complications. It is also committed to:

JDRF focuses its funding on therapies and devices that are truly impactful, either in the sense of bringing something to market more quickly or by reaching the largest possible number of patients.

“The challenge is bigger than we anticipated,” according to Jeffrey Brewer, President & CEO of JDRF. “We remain committed to a cure, but are also focused on helping patients live safely and well until a cure comes, through preventive and treatment strategies and treatments.”

Brewer says that JDRF has started working more with industry, noting that historically, the organization focused on academic-based research.

“Forty years of advances in the academic labs has given us the opportunity to translate developments in the labs to companies that will develop therapies to deliver to people,” he says. “Academic research is a critical early component in the pipeline, but company support is also a critical part of the pipeline. That’s why we incentivize companies to do things they otherwise wouldn’t have done.”

“JDRF is willing to take on more risk at an early stage than pharmaceutical companies,” adds Dr. Richard A. Insel, M.D., Chief Scientific Officer, JDRF. “We also are not driven by profit margins or market size. We act as a sort of virtual pharma or biotech company in the early stages of research, and our industry partners step in to bring therapies and devices to market.”

Brewer explains that once companies are able to successfully commercialize therapies and see a financial return, JDRF is “paid back” by those companies, with funds JDRF drives back into more therapeutic research.

“We also work closely with our industry partners and the government, particularly the National Institutes for Health, to make sure resources are being used most effectively and without duplication of effort,” says Insel. “And we work with regulatory agencies to help them better understand what it is like to live with type 1 diabetes so they can evaluate the risk and benefits of new therapies with an eye toward approving them as quickly as possible.”

The result? ADDF has granted more than $60 million to fund over 400 Alzheimer’s drug discovery programs and clinical trials in academic centers and biotechnology companies in 18 countries.

“Our biomedical venture philanthropy model adapts the operating principles of venture capital investing to the ADDF’s philanthropic mission to advance biomedical research in Alzheimer’s disease. We seek a return on investment for our grants based on the achievement of scientific and/or business milestones. When these milestones are met, funds come back to the Foundation to increase our ability to fund more research,” according to the Foundation. 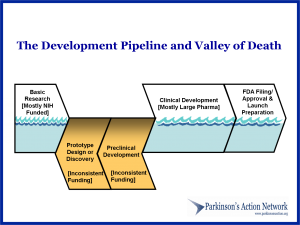 Dr. Insel argues that the participation of patients and families in clinical trials is crucial to translating funding research into impactful therapies.

Do you agree? What other ways can patients living with type 1 diabetes, Alzheimer’s disease or other chronic disease act as advocates for themselves and the disease in general? What other patient venture philanthropy models have you seen work?